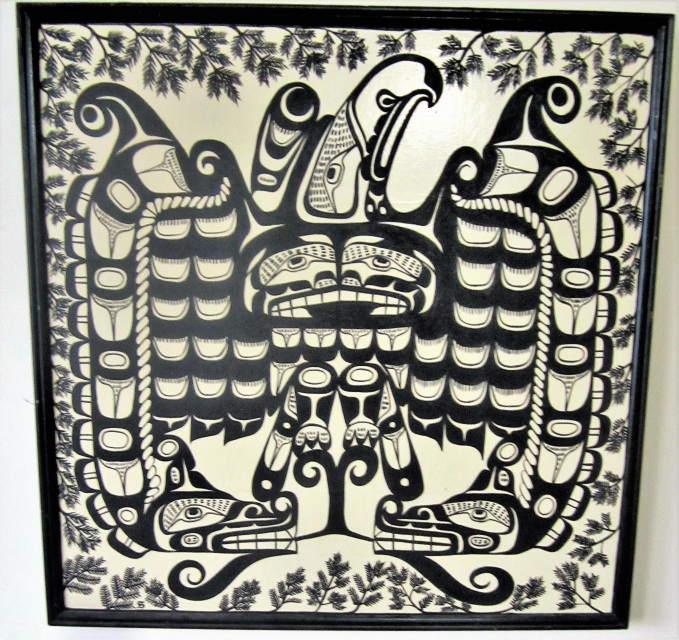 NOS Beautiful, original hand painted and signed 31 inches long by 31 inch wide with his depiction of ''Kolus'' ( Young Thunderbird with Sisiutl, Sea Serpent ) in the style of the Kwakuitl nation painted on canvas with outaide fixed wooden frame and will be shipped as is.

Cecil also believes in not wasting anything and using and refurbishing any material he can to create his beautiful art. This acrylic painting was painted over another painting.

Kwakwaka'wakw First Nations peoples say their ancestors (‘na’mima) came in the forms of animals by way of land, sea, or underground. When one of these ancestral animals arrived at a given spot, it discarded its animal appearance and became human. Animals that figure in these original myths include the Thunderbird and his younger brother the Kolus, the Seagull, the Orca, the grizzly bear and the Chief ghost. Some ancestors have human origins and are said to come from distant places.

The Sisiutl is a symbol for healing power and magic. It's closely associated with war and strength, the Sisiutl is known to be invulnerable and to provide protection from harm. The Sisiutl is one of the most powerful crests, and mythological creatures in the mythology of the Kwakwaka'wakw, Nuu-chah-nulth and various other Tribes and figures prominently in their art, dances and songs. Sisiutl is the god of warrior invincibility, a magic war-canoe that can go underground and guardian of the house of the sky people. Sisiutl are frequently depicted as a two headed sea serpent or snake with a human-like head in the middle of the body. All three heads are surmounted by "horns of power" The humanoid central head likely symbolizes Sisiutl’s supernatural shape-shifting powers Sisiutl could also change size from a few centimeters to a span sufficient to block off a bay. As a transformative creature of vast shamanic power, the Sisiutl could travel in and across all boundaries: land, water, & air. There is a belief among the Coast Salish that Sisiutl employ orca/killer whales for transportation. It is so powerful, that contact or even seeing one, was believed to cause sickness or death. According to legend, looking at the sisiutl can turn a person into stone. However, if one kills a Sisiutl, it has healing powers. Images or sculptures of Sisiutl were employed to guard canoes and cedar plank longhouses.Warriors traditionally wear the sisiutl's emblem for protection in battle. Thunderbirds are one of the few predators of Sisiutl.