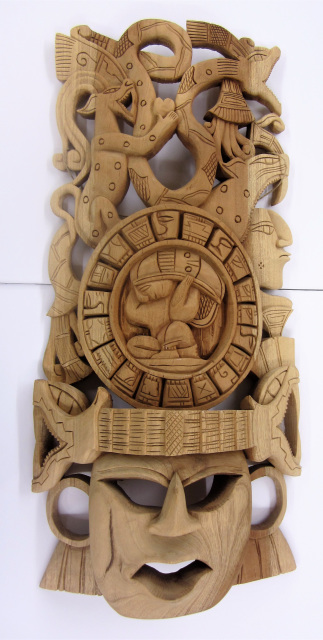 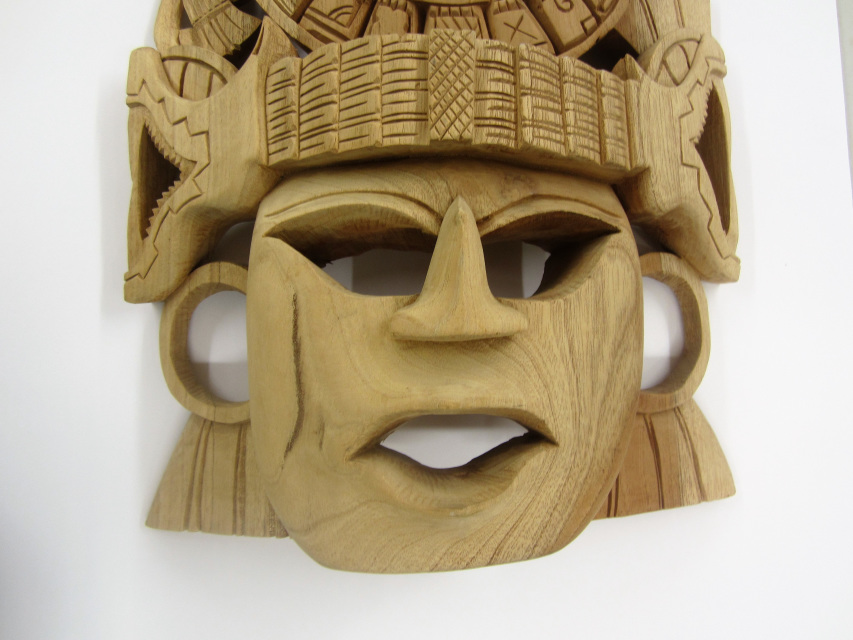 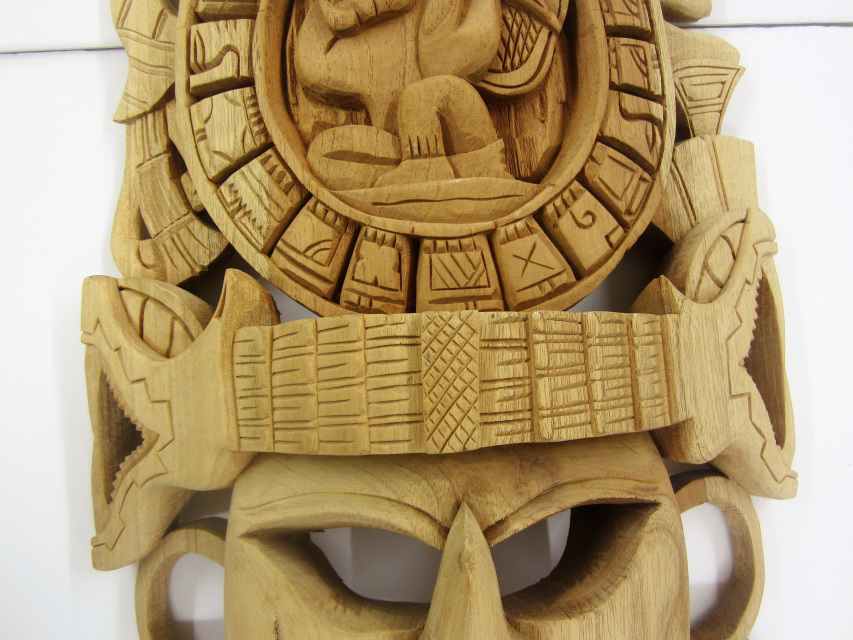 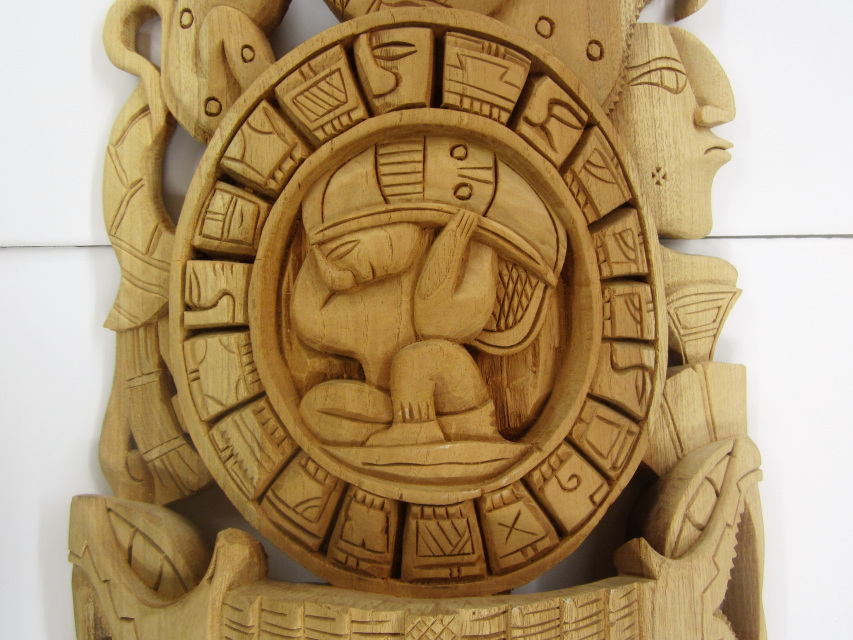 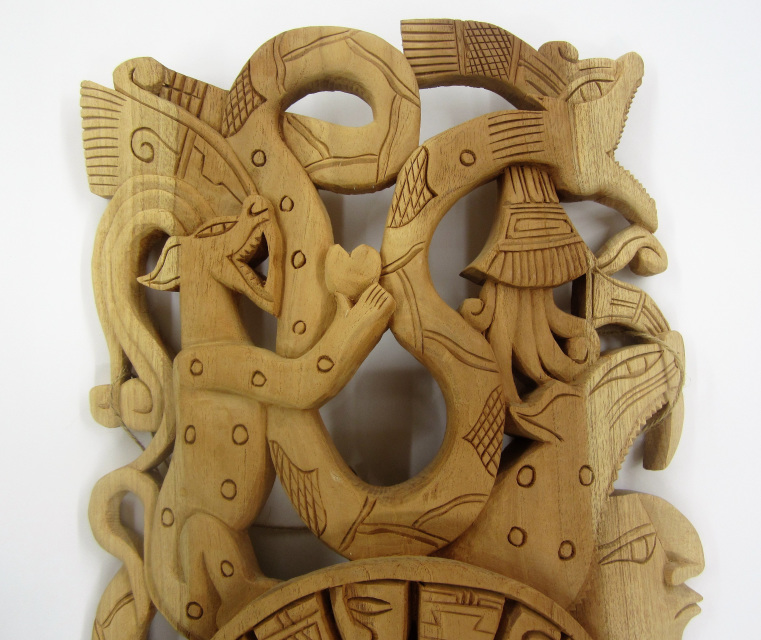 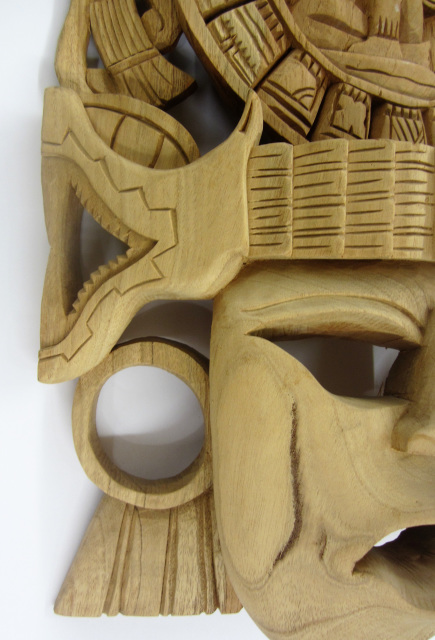 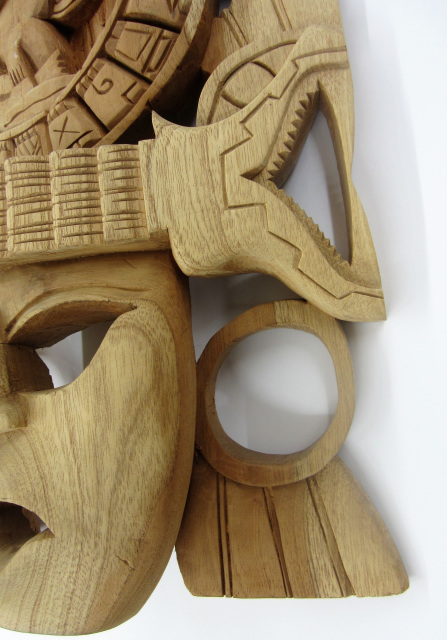 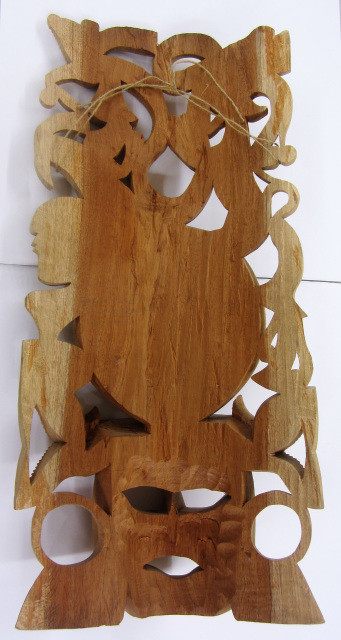 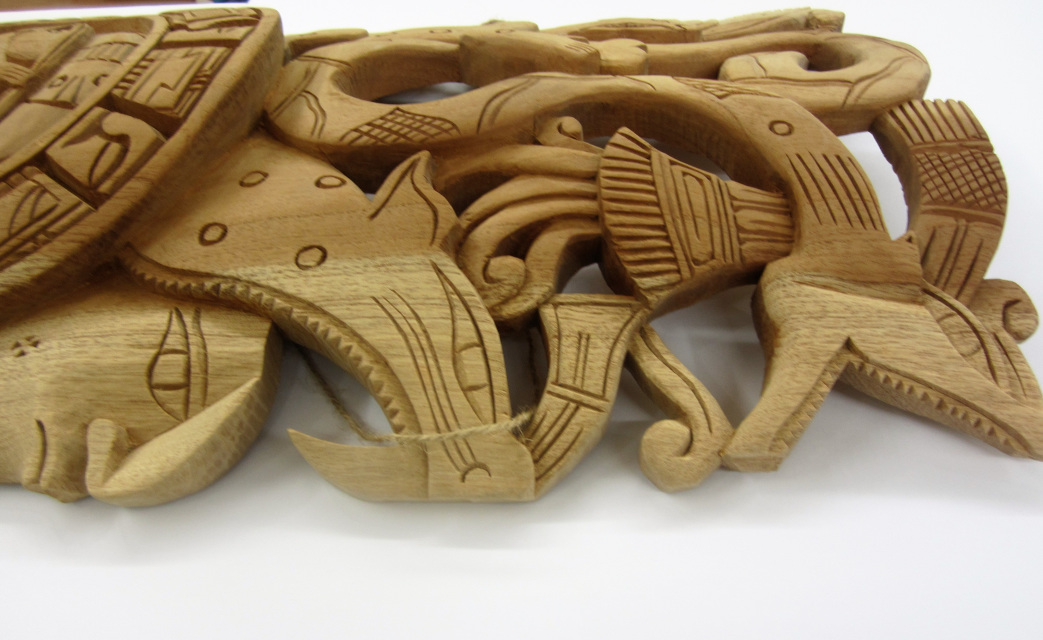 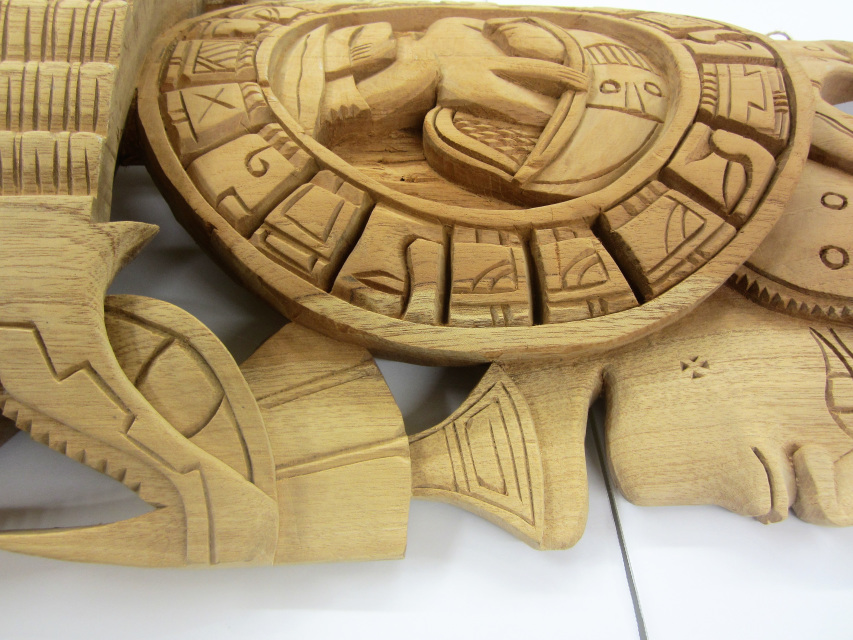 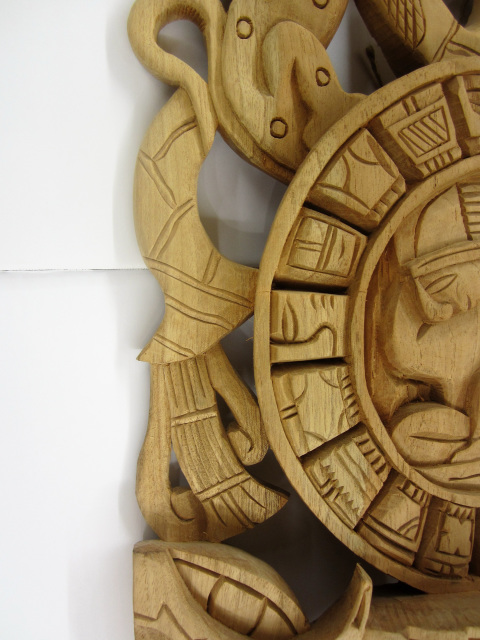 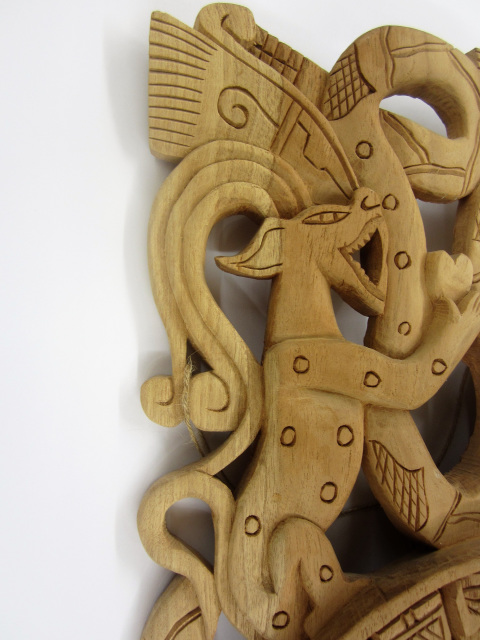 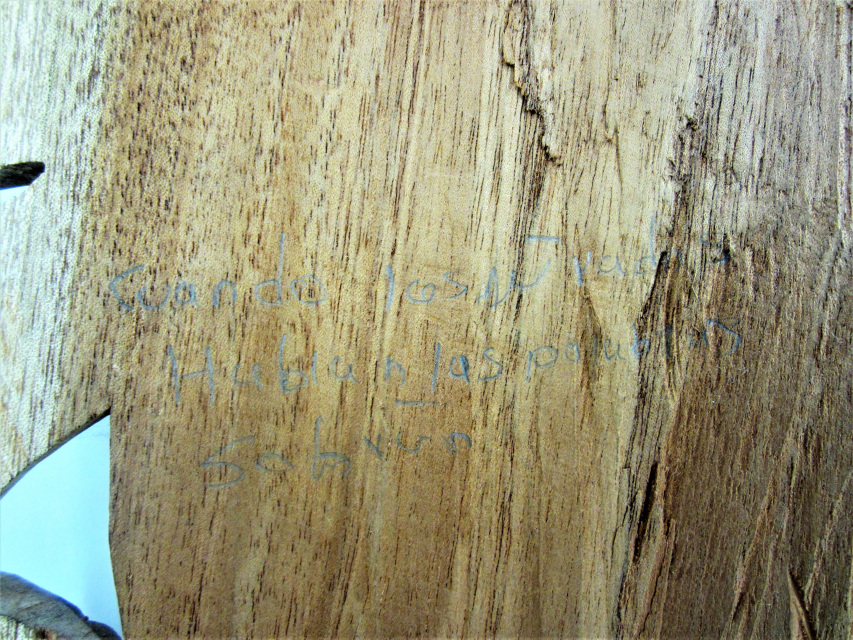 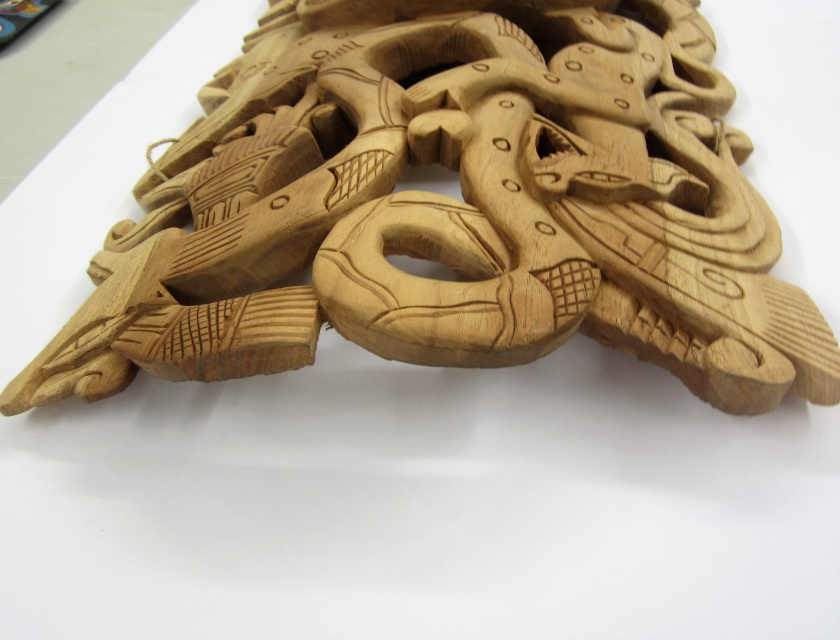 NOS Beautiful, original stunning piece is 29 inch long by 13 1/2 inch wide by 5 1/2 inch deep ''Royal Totem'' wood carving with multiple depiction's in the style of the Mesoamerican natives. This stunning masterful piece is signed in pencil as per photo but is in Spanish and very hard to read.

While today it's easy to identify Mexico and other Latin American countries on a map, you won't find Mesoamerica there. That's because it's a historical region used to designate the areas in Latin America settled by indigenous peoples who have since relocated. This geographical region is important for artistic, cultural, and archaeological purposes.

Architectural ruins still mark the land, and archaeologists continue to unearth findings that shed light on their way of life. From these ruins, we gain a sense of a timeline, a progression of culture and development of artistic styles. Nobody knows exactly how old the indigenous Mesoamerican cultures are, but it's pretty easy to identify when these civilizations disintegrated.

The Olmec and Mayan civilizations predate the arrival of Europeans in the Americas. This time period is called pre-Columbian because it existed before Christopher Columbus' 1492 landing. The Olmec and Maya made their home on the Gulf coast, Yucatan Peninsula, and eastern parts of Guatemala, Belize, and Honduras. The Aztec civilization arose later, coming to dominate the Mesoamerican region of central Mexico between the 14th and 16th centuries. The Spanish colonization of central America, known as the Spanish Conquest, began in 1519 and resulted in the downfall of the Aztec empire. The indigenous Mexica, descendants of the Aztecs, still sustain a population in Latin America.

Even though art historians and archaeologists note the variety of styles among Olmec, Mayan, and Aztec cultures, there is also a great deal of similarities to be found between them. For example, based on their similar calendars made up of 260-day years, archaeologists note how these cultures thought about time. Artifacts and works of art also reveal that these cultures valued similar kinds of materials, particularly green-colored jade stone and bird feathers. Mesoamerican architecture consists of pyramids and temples that display similar building styles and ceremonial functions.

From the ruins of pyramids, temples, and amphitheaters, we learn that religion played an essential role in Olmec, Mayan, and Aztec cultures. They built magnificent structures in honor of the gods, for ceremonies, and for burial rituals.

Mesoamerican artists created works such as paintings and sculptures for several reasons. Many artifacts are simply practical, such as bowls and pottery. Sometimes their art was ornamental, as in the stone engravings found in their architecture.

Whether carved in the likeness of a king or a god, sculptures tended toward a figural, or representational, style. This is an important feature of Mesoamerican art because, unlike many early civilizations that adopted abstract styles, Olmec, Mayan, and Aztec artists represented things in a realistic manner. Mesoamerican artwork served many purposes as well, from royal gifts to ceremonial objects. Nonetheless, magical transformation, shamanic visions, and heavenly apparitions feature prominently in the art of Mesoamerica.